the chit chat Varker and Logan have probably been meanin to have for a long time
Posted June 6, 2018 at 03:28 pm
got a lotta 'splainin' to do Varker
LAST DAY OF SNY KICKSTARTER + NEWS ABOUT ACRYLIC CAMPAIGN!
Posted May 17, 2018 at 06:29 pm
Hey there!! I just got back from TCAF and had an AMAZING time, so THANK YOU for everybody who came by!! I always love meeting everyone and it's just so great and heartwarming!! I got to do some awesome commissions and shake hands with some really amazing people and I could gush forever but I'll refrain.

FIRST OFF! There's only about 30 HOURS left in the SEEN NOTHING YET Kickstarter Campaign! We've reached the two stretch goals--the campaign now has added an awesome sticker sheet and Owen's Thunderbolt as a patch so you can wear BOTH THEIR SYMBOLS at the same time!! Thank you SO much for the overwhelming success, I'm really speechless!! Here's the last chance to go grab or upgrade tiers before it closes up and we start on working on making all these goodies a reality!

SECOND OFF! I am also a part of ORGANIZED HAVOC'S Acrylic Standee Kickstarter Campaign, where you will find other AMAZING characters from great comics such as BARBAROUS by the stunning Yuko Ota and Ananth Hirsh, or CHECK PLEASE by the amazing Ngozi Ukazu, ATOMIC ROBO by the genius duo Brian Clevinger and Scott Wegener, SAINT FOR RENT by the phenomenal Ru Xu, and KNIGHT'S ERRANT by rock star Jenn Doyler! Please give it a peek, so that I can be greedy and see these all into fruition cos I want all the other standees and have an army on my dresser.

Thank you all so much, and hope you all have been doing well! I have a lot of other really exciting things planned for the future, and I cannot wait to share! You all ROCK and hope you're having a great day and being your best selves. If I had access to emojis right now, you KNOW I'd spam the sparkle. Hey everyone!! I'm happy to announce the micro Kickstarter for Seen Nothing Yet, my 18+ erotica comic about two boys attempting to be amateur ghost hunters and finding more distraction in each other than anything else...! It's got two goofy dudes, it's got some spooks, and it's got a lot of steam! It can also be found online at Slipshine (18+ only link, please!!). But this Kickstarter is to replenish volumes 1 + 2 for print, as well as print volume 3 for the very first time!!

There's extra rewards like a reprint of the ghost charm, a NEW GHOST PATCH, and also a chance to get original drawings of these dweebs. Thanks, as always, for your support! You guys are all amazing and love you all!!!

-Tess!
Tags: KS, blog, 18+
DARK ZODIAC NOW AVAILABLE IN MY STORE!
Posted March 27, 2018 at 01:34 pm
Hello!! If you missed the Dark Zodiac Kickstarter, the good news is that NOW YOU CAN BUY THE SET ONLINE at my Shopify! How exciting! I am also working to make the Digital PDF available as well so you can see what the cards mean and also more about the setting of my homebrewed world of Kicker's Bluff!

Thanks so much if you backed the Kickstarter for allowing me to make a large run of this, and as always, your support is amazing and wonderful! Thank you!! NEW SHIRT IN STORE!!
Posted March 20, 2018 at 12:12 pm
Added a new shirt to my store! It's the tee that Logan is wearing in the latest chapter! You can now match this lost, sweet boy.
MY SHOPIFY
SURVIVE THE DAY
SURVIVE THE NIGHT Life stuff!!
Posted March 14, 2018 at 12:30 am
So life has been a little bit crazy lately. GOOD! But crazy! I'm currently in the middle of a very sudden move, got a second job at Starbucks to peddle beans, and just came back from ECCC in which I caught a tiny bug! Things are on the up and up, but for the rest of this week and the next week, I'm going to be posting some of my experiences while I've been transitioning on T and also just other things going on. You can also see all of them right now at my Patreon! I'll also be posting some story stuff about the comic I plan on doing after Not Drunk Enough later this month there if you're interested! I'm so EXCITED to be going back to ECCC! It's such a wonderful con, and I always have a blast. I will be tabling with Jenn Doyle of Knight's Errant at table P4, so please come by and check out the rad stuff we'll have and also just to say hi! As usual, I'm surrounded by even more amazing talent, such as Ananth Hirsh and Yuko Ota of Johnny Wander, Brian Clevinger and Scott Wegener of Atomic Robo, Ru Xu of Saint for Rent, Ngozi Ukazu of Check Please! and George Rohac of Organized Havoc who wrangles us every convention, which must be a little like herding cats.

Hope to see you there!

Also, I'm sad to say that between a very sudden move, ECCC and catching up on deadlines, I won't be able to update Not Drunk Enough with comic pages until I return! Thanks so much for understanding!!

-Tess!
SEEN NOTHING YET 1 & 2 HARD COPIES AVAILABLE!
Posted February 7, 2018 at 12:01 am
Have you ever wanted to read an erotica book about two amateur ghost hunters who were kinda bad at their job but really good at making out (and beyond)? WELL THEN. Let me tell you, I have SOMETHING UP MY SLEEVE. Seen Nothing Yet is an on-running erotica series about Owen and Nash that is also hosted on Slipshine (18+ only to click!!) and is now available to purchase at my on-line store! Only previously available at conventions, you can now have your own 24-page full color copy of some of this delightful nonsense.

If you're interested in seeing the THIRD installment, please check out Slipshine (18+++++ STILL!!) !! Love you all! 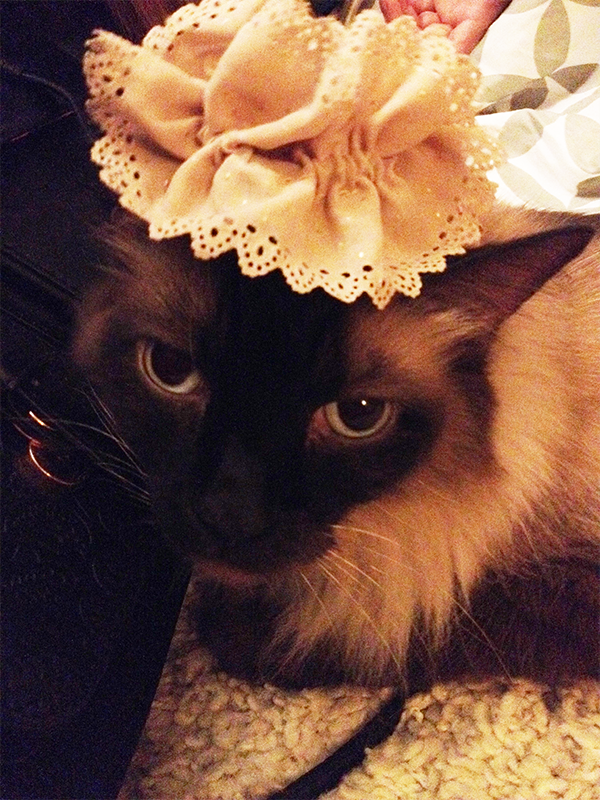 My cute cat son being sick...!
Posted October 27, 2017 at 04:42 pm
Hey everyone!
I hate doing this kind of stuff, but I've been not only struggling with balancing the payments for my hormonal therapy to transition, but now I want to be able to give my cat Lock the best treatment that he needs in order to recover.
He recently started losing quite a bit of weight, and taking him into the doctor revealed that an unusually large mass was found in his abdomen. We immediately went to do tests and it turns out that there's a very high chance that he has small cell lymphoma, which is something our other cat (Puck) was diagnosed with a year ago. It's very unusual for two cats in the same household to have this problem, and it's absolutely NOT contagious or something they can get from their environment, so it's very surprising and a little disheartening. However, it's also hopeful, because Puck bounced back very well from treatment and is still recovering wonderfully. It just also means that one more cat requires a heavy stack of vet bills that are getting tough.
Posted are a few pictures of what I've had to cover because of his sickness (minus the flea medication, that's just a refill).
That said, anything helps! I'll be posting on my Patreon about his journey, my journey on T, and his recovery, and I thank you SO much for taking the time to listen!
Love you all, and thanks for your support as always!

Here's an example of the wallpaper that Patrons got last month!

Just added the eyeplant enamel pint to the store, so if you've been itching to pick that up here's a good chance!! 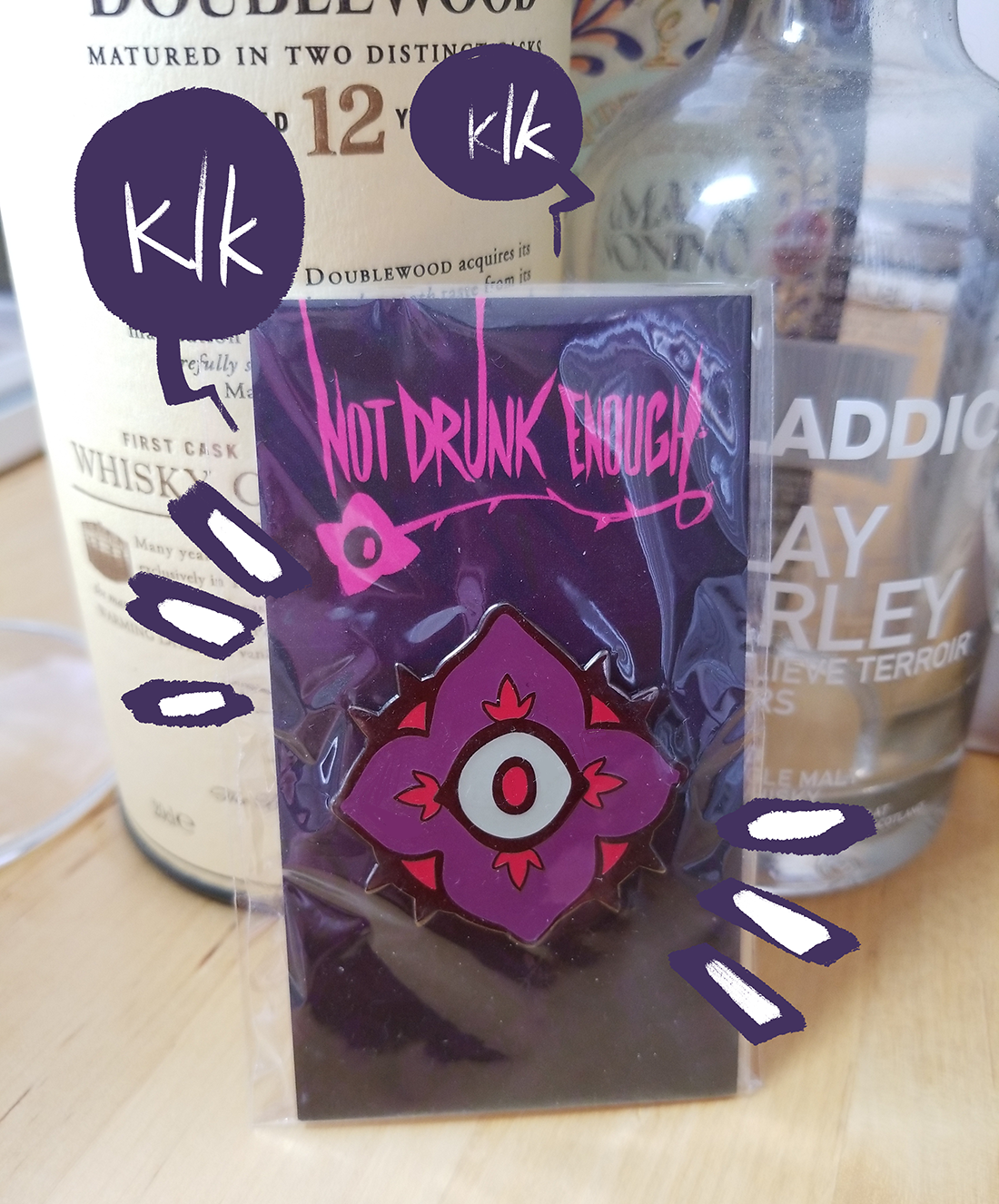 Thanks again for all your support and understanding! YOU GUYS ARE THE BEST!!!